A Novel of
Science-Fiction Horror from
WILLIAM KELY McCLUNG 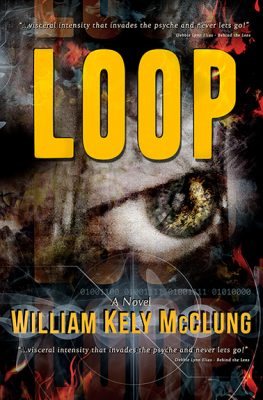 Available in all formats
from
Amazon!

From the liner notes

What the hell is this book LOOP about?

Science-Fiction Horror Thriller — the labels could go on. Mutants, Artificial Intelligence, Gene manipulation, Military Action Thriller. LOOP is all of these and more. Social commentary, political satire, apocalyptic romance. A love letter to friends who will always remain a part of my film and author journeys.

LOOP began as a short film project, shot over two grueling days north of Chicago, starring Ursula Maria, and produced with my friend, Carmine Perrelli. Cold, dark, underground, 18 hour days, but we got it done. The completed eight-minute short film was accepted in nearly twenty festivals and won best film awards at most of them, including winning the “Adler” (Best Film,) at the Austrian Film Festival in Vienna.

Of course, money for films is always an issue, especially on a short film, and many compromises were made to the story and the original concept. Still, the success was enough that the original story idea stayed with me.

As the feature film “La Loi Du Destin” (The Law of Destiny) I was scheduled to produce and direct in Cameroon, Central Africa, was put on hold because of the worldwide pandemic, I concentrated on my writing.

My writing process is probably a bit different than most. I first rewrote the short script LOOP as a full feature screenplay. Then I buckled down to write it as the novel that’s out now. That, of course, made me go back to tweak the script, which in turn pointed out a few flaws in the manuscript. A bit of back and forth, and I’m thrilled to now share both. LOOP makes my twenty-ninth feature screenplay and my first released novel.

As an artist, I probably agonized over the cover art and the typesetting more than most. Or maybe not. I can only speak for myself, but I’ve put an additional year into the final product before releasing it.

I know I am proud of it and have every intention to put this on screen as close to the written word a possible. I am honored that you’re reading these words now, and I sincerely hope you enjoy the novel, LOOP.

I appreciate the time you've spent with me on these pages.

The images on these pages - a set of four Loop Collector cards, are available for purchasei

The images on these pages - a set of four Loop Collector cards, are available for purchasei

who is this guy?

Subscribe for updates on new books, the sequel, and to read the feature film screenplay!

"I still amazed that every book in the English language is told with a combination of the same 26 letters. There are comparatively few rules in telling a story,
and in a science-fiction, all bets are off!"

Join in on the adventure!

Lots of places to find me!

Subscribe to the monthly newsletter, and receive exclusive updates on the sequels, short stories,
and download the full feature screenplay for the LOOP!
You'll have a chance shape the sequels as they're written and the movie before it's made!