Wow, there are a lot of arguments for and against reviewing and rating your own books. I can only add my two cents for LOOP, my first published novel.

Like most others (I would hope) who’ve finished and published their stories, I’m proud of it. It’s the kind of book I would enjoy discovering, and have enjoyed reading. haha (about a thousand times!) It’s exciting, disturbing, original, emotional, and filled with science and relevancy that I hope will make it resonate for a long time.

It’s filled with original, quirky characters, both male and female. The monsters are both new and original, and yet familiar enough that I was able to find shortcuts in the writing, yet fleshed out enough to be prescient and believable, I worked hard to give them scientific gravitas and explanation without slowing down the story.

I’m convinced after all the research that went into the story, that some version of the LOOPERS will exist in our near future.

I think the storytelling and ‘voice’ feel original and organic. The pace feels, like my hero himself, ‘relentless.’ Nothing was forced — the literary devices I used, the breaking of conventional grammar, and the rapid changes in POV were done in service of the story, not for the sake of being different. Was it always the best choice? I can only say that it was for me, at this time, telling this story.

I would like to see more with these same heroes. I hope others find Jessie and Ula walk every bit as tall on the page as Bad Ass. I’d be proud to know and spend time with any of them and will be as I tackle the sequel over the next year.

The descriptions and world-building feel strong to me. I think (and hope) that people can hear, smell, taste, feel, and see the world(s) I painted.

The cover is strong, the typesetting agonized over and appropriate for the genre, and the blurb feels right. 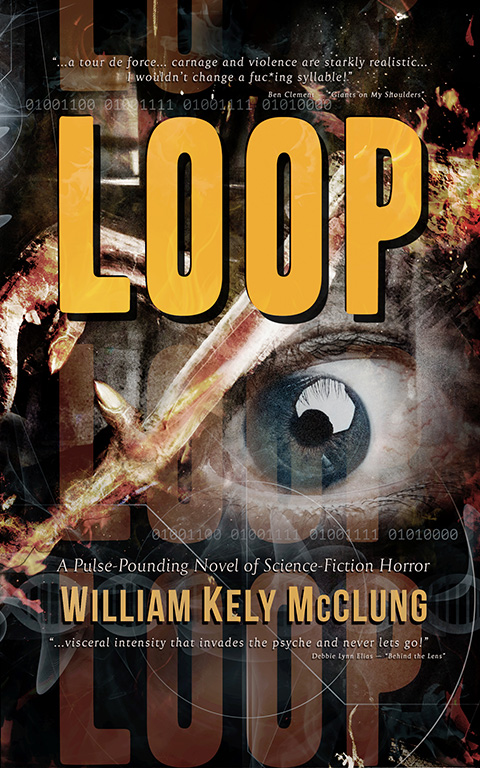 So what’s my verdict? hmmmm

The quality of our communication is not measured by our intent, but by what is understood, and so ‘ratings’ for my book LOOP will have to come from others.

I do think LOOP is good… but not perfect.

Anyone who read it before mid-August no doubt found multiple typos and misspellings. I hope it didn’t take away too much from their enjoyment of the book. Though I’ve written on my fuczm blogs (fuczm – the shit in my head) about how much I love being able to fix things as I find them on Amazon, and I haven’t stopped fixing mistakes in the manuscript since I first published in March, I got so caught up in so many micro changes to the cover that I forgot to upload the repaired and upgraded manuscript!

Eshhhhh…. what a stupid mistake and one I can only apologize for.

Coming from a film background,having written and ghostwritten 30 feature screenplays, I eschewed as many superfluous words as possible, adverbs and pronouns and redundant nouns and subjects. I did my best to write an epic tale in as lean a form as possible, but I know that I didn’t always hit it as smoothly as I hoped.

I do think I came close to making the words and story on paper feel as close to watching a kick-ass sci-fi/action/horror story on TV or on screen as possible.

Once I decided to never name a character until it happened organically, in the dialog or with another device, I stayed consistent, never breaking the rule, but perhaps I could have for sake of familiar convention and clarity.

So… not perfect. I’m thrilled for every person that likes it. Though I can’t boast thousands or even hundreds of reviews yet, between Amazon and Goodreads, with just over 50 ratings so far, (and most from people I’ve never met) 45 have seen fit to give me their highest mark.

I can’t give myself that ⭑⭑⭑⭑⭑ review, but maybe, and I can only hope it’s always this way, it’s much more about the feelings, the quickening of mind and breath when we read, the stirring of imagination, and the emotions and thoughts we inspire, rather than the technical mechanics of the writing.

I have so many stories to tell and know I have a long way to go, but I am learning – or hope that I am. Thanks for sticking with me!